Codependency: What it is and How it Happens

Codependency is one of the most common things I work on with people in counseling. I would honestly guess that at least 90% of the people I see in therapy struggle with some form of codependency. Chances are you’ve heard the word codependency before, but do you really know what it means? Most people have some kind of negative connotations associated with the word. In my experience, a lot of people fixate on the word “dependent”, and think codependency means that they are excessively needy and can’t live without a particular person they’re fused with. This can be the situation in severe cases but codependency more so refers to an unhealthy pattern of relating with others that tends to be very altruistic. People who struggle with codependency tend to put the needs of others above them. They suppress their own needs in relationships, feel uncomfortable asking for things and/or saying how they feel. It usually revolves around an internalized belief that they are un-lovable and/or will be a burden to others if they ask to have their needs met and/or openly express their emotions.

Why is it Called “Co-Dependency”?

Like many words used in psychology, the meaning of word co-dependency has evolved over the years and tends to take on slightly different meanings depending on the context it is used in. Some people use it to describe being overly dependent on a person, being “addicted” to a person, or even “addicted” to unhealthy relationships. Although these situations can certainly be true, the codependent person does not necessarily perceive of themselves as or look “dependent” on another person. I think it is more accurate to describe the “dependent” part of the word as meaning that the person’s self-esteem and sense of safety/security are dependent upon their interactions with another person and how that other person feels. In this sense co-dependency relies on the distinction between self-esteem and other-esteem. Self-esteem is when you feel confident/ok/good about yourself because you know you can handle yourself and are generally able to get things done in life. Other-esteem on the other hand is when your sense of safety/worth/ability is dependent on your interactions with others. Self-esteem says “I know I am ok and can handle this”. Other-esteem says “I need to feel useful/valid/good in your eyes to feel good about myself”.

To some extent this stuff is normal! All people experience some degree of what might be labeled codependency in relationships, and that’s good! It’s when it becomes overly altruistic that it becomes a problem, when you’re really going out of your way and sacrificing to avoid upsetting or inconveniencing another person. Because of this confusion/hangup on the word dependent, there has been some push to rename codependency to “self-love deficit disorder”. This more adequately reflects the self vs. other esteem and negates the emphasis on unhealthy relationships that are not always present or the central problem in co-dependency.

How Does Codependency Happen?

The most important thing to understand about codependency is how it happens. Codependency is essentially a maladaptive coping skill that typically develops in childhood. As children raised in unhealthy relationships, this coping skill is functional in the sense that it keeps us safe from being smothered, shamed, or otherwise crushed by unhealthy parents. Once the child grows up and leaves the unhealthy environment, their codependent behaviors will likely no longer be functional. The child no longer has to pacify their parent(s) through codependent behaviors, but by that point doing so has become ingrained/automatic. The person then moves forward applying those same codependent behaviors to future relationships even if their partner isn’t threatening/dangerous to them in the ways their parent(s) were. Codependency then becomes a hindrance rather than a survival skill. Understanding how codependency happens helps us to recognize why we behave the way we do and why those behaviors are no longer necessary.

Codependency doesn’t always have to come from being raised in a family struggling with addiction. It typically comes about in one of (or a combination of) 4 ways:
1) you were a parentified child; meaning you were made to feel responsible for your parents and/or family in general growing up, taking care of them instead of them taking care of you.
2) you weren’t allowed to be imperfect (every child messes things up)
3) you were shamed or punished for your emotions. The lesson here ends up being that emotions push loved ones away, rather than pull them towards you in a supportive way.
and/or
4) you were a victim of gaslighting, which essentially means that your parent(s) or other important person(s) invalidated and made you question your emotions and perceptions to the point that you might have thought you were crazy.

Any one of these things, or a combination of them can result in a person who carries shame and the internalized belief that they are a burden. The saddest part about this that I see in therapy is that people who really struggle with codependency often want nothing more than to feel the closeness of good, positive relationships, but they really struggle with just being in the moment and being themselves when they are around other people. Especially people they care about. I often use this analogy: for the codependent person, saying something like “I don’t feel safe and I need you to hold me” or even something as simple as “no” can feel like what any person would feel if they were trying to run across a freeway. Technically you can do it….but there’s a deep nagging sense in your gut that you really shouldn’t and you’ll likely get hurt.

How can Counseling Help With Codependency?

Counseling for codependency revolves around helping people to explore how they became codependent, how it affects their current relationships, and how they can change their automatic codependent behaviors. We do this through examining and challenging core assumptions like “I am a burden if I ask for help”, recognizing “triggers” that evoke codependent behaviors (some triggers might be the thought of asking for help or exposure to perceived or real conflict), recognizing automatic thoughts that come up when you’re triggered, and working on alternative, more conscious responses to those triggers.

This might sound a little technical and like something you could just read out of a book, and to some extent you can, but counseling can be particularly beneficial in cases like this. Codependency revolves around feeling unsafe with people on a gut level. It represents a real break in a person’s ability to feel safe and comfortable in relationships. In counseling we work on codependency through the therapeutic relationship. I build authentic, trusting relationships with my clients so they can feel comfortable with and/or tolerate the momentary stress of confronting their codependent thoughts and behaviors with me. Most of the work happens within that relationship. Essentially in codependency counseling it is my job to be like a healthy parent. I will be there for you to support you, provide unconditional positive regard, and, when you are fearful that you have something to say that might upset me, I won’t be that person who gets pissed off and freaks out at you. In this way, you can explore your codependency with some reduction in the fear/apprehension you feel from it, then get some experience being more assertive/vulnerable, then apply it to other relationships, and grow from there. Happy, healthy relationships depend on the ability of each person to be vulnerable with the other. Sometimes this is scary and uncomfortable, but you cannot be close, connected, and secure without that vulnerability. This is especially hard for people struggling with codependency. The ultimate goal of counseling when it comes to codependency is to get to a place where you able to be vulnerable in a healthy way with people you love.

When I work with clients who want to know more about codependency and/or work on it outside of therapy, I often suggest they read Facing Codependence by Pia Mellody. 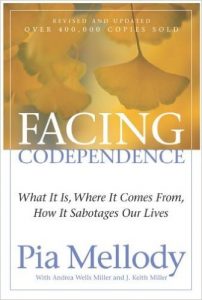 This Article was originally published on the website of Joe Borders, MFT

If you or someone you love is struggling with codependency related issues please take a look at our codependency therapists. They may be able to help. SacWellness.com is home to over 190 therapists located in the greater Sacramento area. This includes places like Antelope, Citrus Heights, and Davis.

The Common Symptom of Addiction Recovery that Nobody Talks About.
Addiction is a Disease
The Still Face Experiment and Attachment Injuries.
Previous
Next