The Common Symptom of Addiction Recovery that Nobody Talks About.

The Common Symptom of Addiction Recovery that Nobody Talks About

Recovering from addiction is challenging and requires a lot from people. There are many hardships that come along with recovery, some well known, and some that don’t get talked about very often. In my experience as an addiction counselor I have consistently seen a lack of discussion about a very important issue that comes up for most if not all recovering addicts: anhedonia.

Simply put, the word anhedonia refers to a significant reduction in a person’s ability to experience pleasure. A person who is suffering from anhedonia might not experience the same level of pleasure, or any pleasure at all from things that they used to really enjoy. People find themselves feeling kind of emotionally dull, numb, or “cloudy”. This is really hard for those in recovery because it can come to seem like life is dull without substance use. 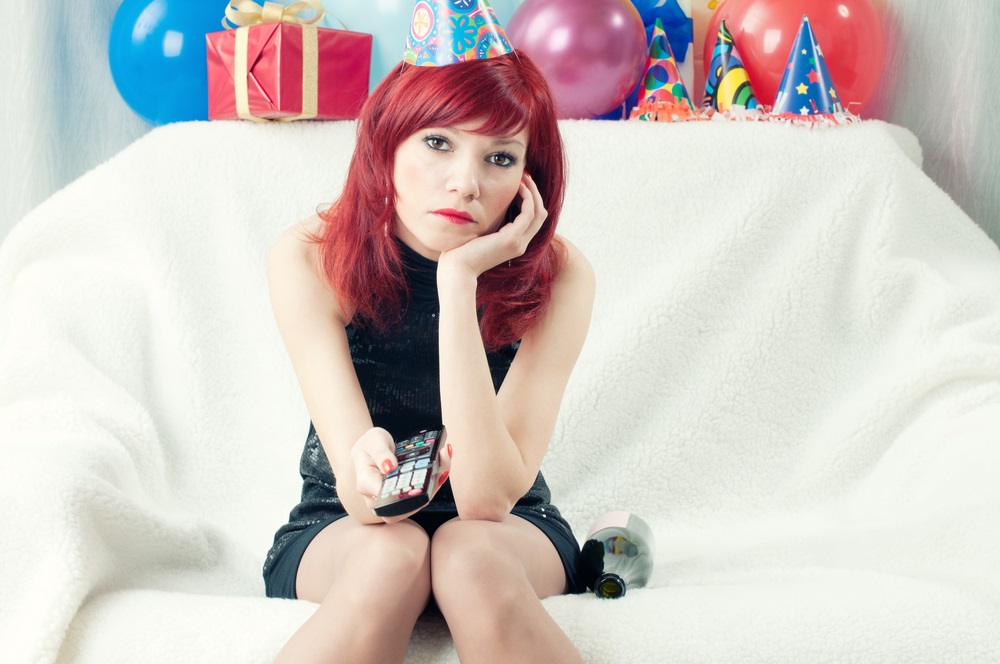 Anhedonia is common in the early stages of recovery

The most common symptoms I hear people talk about in addiction counseling are difficulty sleeping, memory/concentration problems, depression, lack of energy, and anhedonia. In this post we are going to focus on anhedonia, because I’ve had far too many people come to therapy who are experiencing it and think they’re crazy because they’ve never heard about it.

Why is Anhedonia so Common in Addiction Recovery? 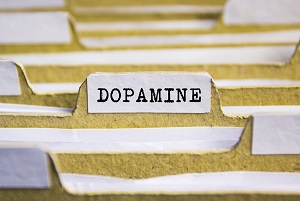 ….unfortunately for everyone, I am unable to find a good video or illustration to depict all of this, so we’re going to have to settle with my clumsy microsoft paint skills :-p. The following is a simplified depiction of the effects of addiction on dopamine in the brain.

When you do anything that is pleasurable; eating cookies, having sex, talking with a loved one, watching a good movie, whatever, dopamine is released in the brain. The problem that comes up in addiction is how much and how quickly dopamine is released. The following is a depiction of what might happen when a person engages in drug free pleasurable behaviors. Dopamine is released by neurons, which in turn essentially tell other neurons that something pleasurable is happening. 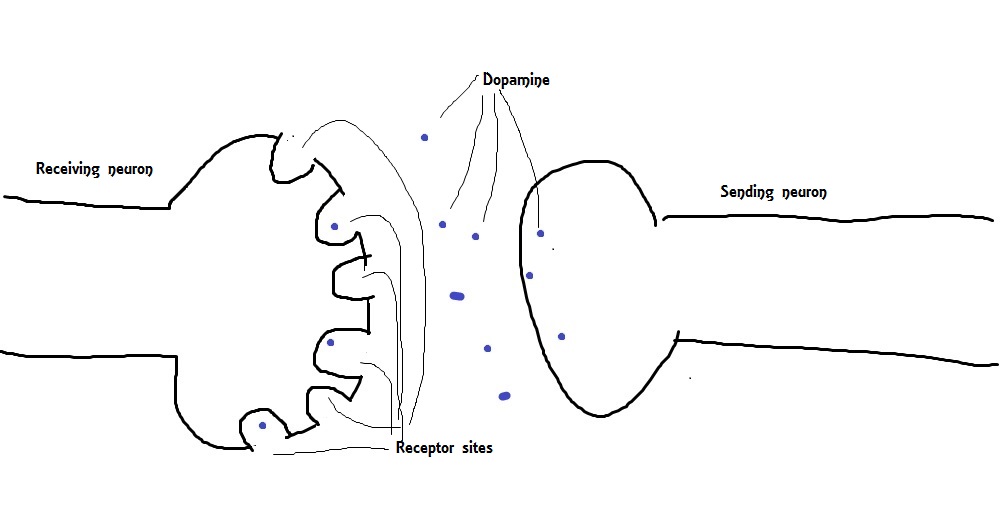 dopamine is released in the brain, causing feelings of pleasure.

In the brain, the big difference between something like eating cookies and shooting up heroin, is the amount of dopamine they cause to be released. The following image depicts what it might look like if someone snorted a line of cocaine. 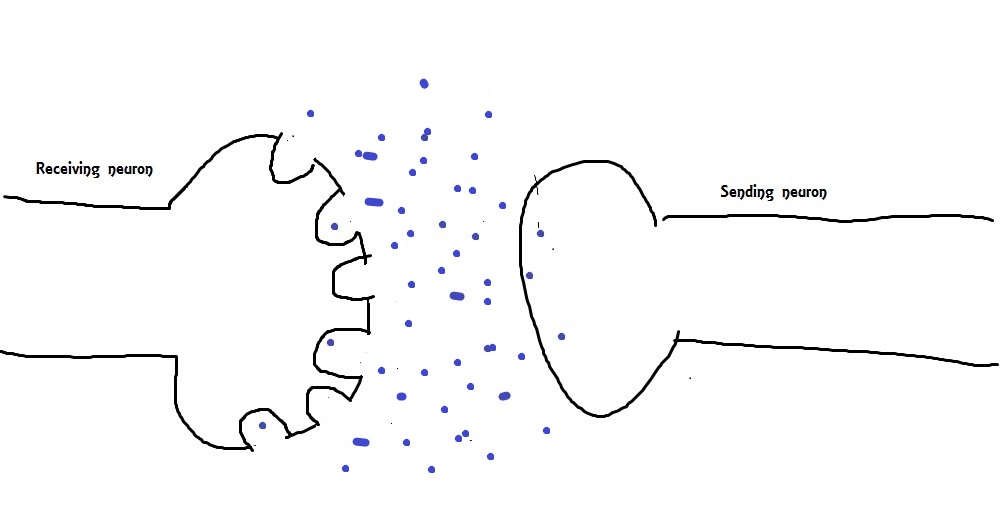 Drug use results in the brain being flooded by dopamine, making the person feel high.

You can see that a lot more dopamine is being released here. This is where something called downregulation starts to happen. In general, the brain doesn’t like anything in extremes, and does its best to maintain balance. Over time, the brain responds to being flooded with dopamine by reducing the number of receptor sites for dopamine. This is called receptor downregulation. 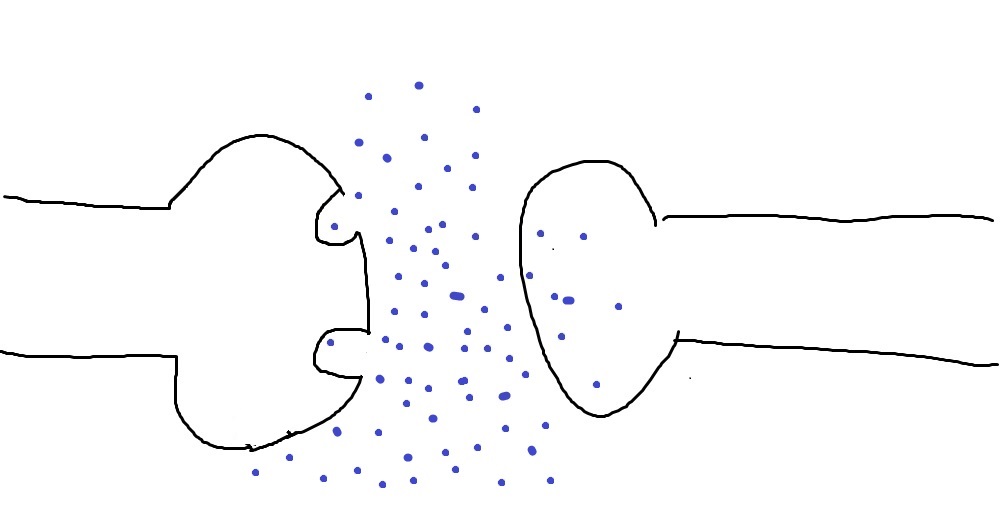 The brain responds to excess dopamine by reducing the number of receptors available.

Downregulation reduces the effects of so much dopamine in the system by reducing the number of receptors the dopamine molecules can fit into. This is tolerance in action at the neurochemistry level. When people repeatedly use substances, over time they find that they need to use more in order to get similar effects. Receptor downregulation is the reason for this. Because there are fewer receptor sites, there needs to be more and more of the drug to induce the same response.

In a way all of this is good. It’s an example of the brain adapting to changing conditions. The problem (aside from tolerance) is what happens when you decide to stop using the drug. When you’ve taken something to the extent that you experience tolerance, your brain has actually physically changed through actions like downregulation. This is why many people now consider addiction to be a disease.

Over time withdrawal effects subside, but our brains take a particularly long time to recover from dopamine tolerance. Like I said earlier, everything that brings you pleasure does so because it releases dopamine in key areas of the brain. When we become tolerant to dopamine we essentially become tolerant to the feeling of pleasure, joy, and to some extent, happiness. This is anhedonia in action at the neurochemistry level, and why anhedonia is such a pervasive problem among recovering addicts. 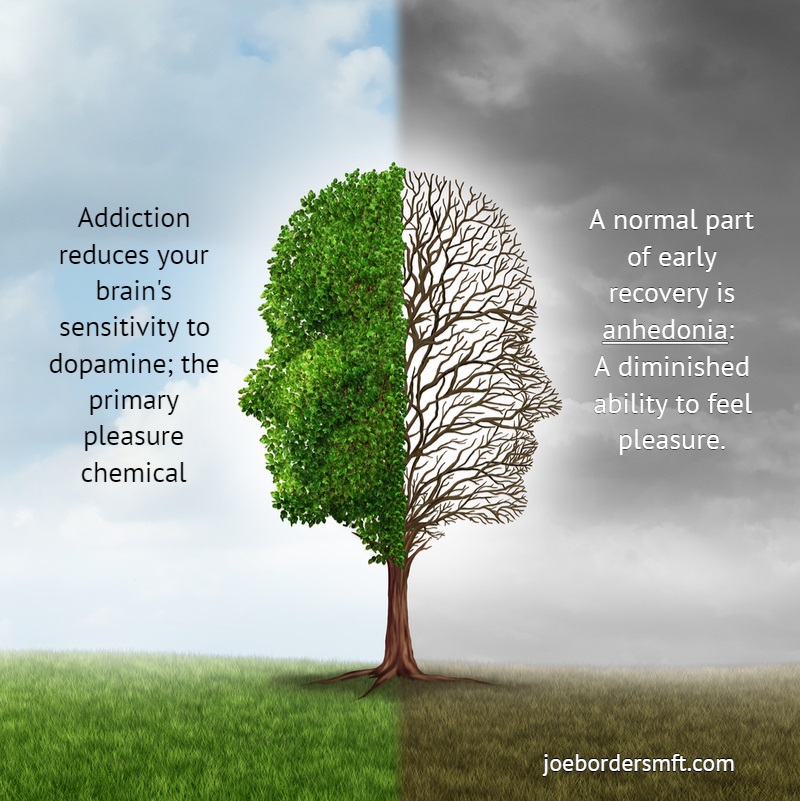 So using our poorly drawn image examples from earlier, after using a drug and becoming tolerant to it, the brain responds by reducing the number of dopamine receptors. Once the drug is gone, the brain goes back to releasing a normal amount of dopamine. This normal amount no longer produces the same effects because there are fewer receptor sites for the dopamine to fit into.

I often imagine it like this: say you’ve got a bunch of marbles and you’re standing over a board with a bunch of holes. You drop the marbles and several fall through the holes. Now you plug up a bunch of those holes, do the same thing, and you’re hardly getting any marbles through. It sounds crude and dumb…and in some ways that’s because its more complicated than I’m explaining…but in other ways it’s truly because it is this crude and dumb :-p

How Do You Get Over Anhedonia?

Because every drug, person, use pattern, and length of use is different, it is really hard to say how long anhedonia will last in any one person. Despite this, anhedonia from drug use should go away with time for most people. This is because, unlike in most cases of depression, anhedonia from drug use is due to a relatively simple cause and effect chain of events. You stop taking the drug, and over time the brain gets used to a normal amount of dopamine and starts to open up old receptor sites that were closed during drug use. This is why it’s so important for people to be aware of anhedonia. If you know that this is something normal and to be expected during recovery, then you can 1. know you’re not crazy, 2. hold the positive outlook that things can and will get better, and 3. have another piece of ammunition in your battle against relapse that tells you the drug isn’t worth it.

In addiction counseling the goals when working on anhedonia are:

All of this is hard. Aside from all of the neurochemistry involved in anhedonia, it can be hard simply knowing that there is something out there that will satisfy an itch. I often use this analogy with people: Recovering from addiction is a lot like being healthy, losing weight, and going to the gym. You can go to the gym every day, eat right, lose weight, and feel good about yourself. But there are going to be days when you think about eating a couple of cheeseburgers while lounging around watching TV. Simply having had the experience of enjoying a couple cheeseburgers and watching TV makes it harder to stay consistently healthy, because in the back of your mind you’re going to remember those cheeseburgers on occasion. 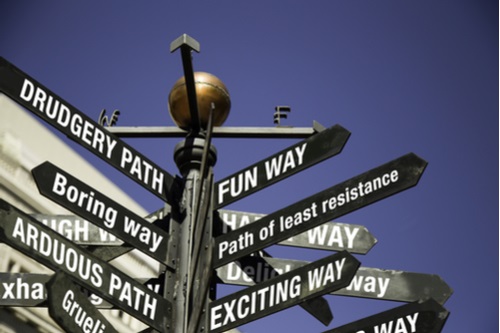 When it comes to anhedonia, just like when first starting a diet with healthy exercise, it will be hard at first, and your healthy lifestyle might seem lame in comparison to the highs you got from drug use. But over time, with patience and perseverance, you will come to a place of deriving much more joy out of your healthy life than you did out of drug use.

After acute withdrawal symptoms, this is the most common thing I work on with people in addiction counseling. Most people, addicts included, would agree that having a stable, healthy, predictable life is much better than having an unstable, unhealthy, unpredictable life. The problem recovering addicts bump up against in anhedonia and a little beyond, is the idea that despite this truth, using the drug feels exciting, and sometimes that healthy life can seem boring. This is where the importance of addiction counseling and good support comes into play.

Anhedonia is hard. If you’re experiencing it, or if anything in this post resonates with you, give me a call and we can talk about how I might be able to help. You can also click the following link to read more about addiction counseling with me.

Addiction in Advertising: How Advertisers Speak Directly to Addicts
Addiction is a Disease
Codependency: What it is and How it Happens
Previous
Next